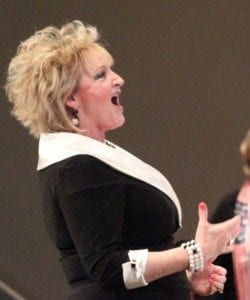 KATHY BOWMAN
Director of Music and Ministries; Host, Psalm 95 Radio Ministry
A native of Washington, D.C., who grew up in Arlington, Virginia, Kathy Bowman (formerly Kathy Miller) has been involved in music as long as she can remember! From singing around the piano and harmonizing in the car with her family, to playing for church services, denominational gatherings, school choruses and music festivals, Kathy has been immersed in music. She studied both piano and violin from an early age and it didn’t take long for her unique gifts in playing by ear (as well as by note) and in improvisation, to become apparent. Recognizing her talent early on, her high school choral director invited Kathy to serve as conducting assistant and also commissioned her to write an original arrangement of Christmas favorites to be performed and recorded by the school’s choir.

Kathy holds a B.A. in Music from the College of William and Mary with an emphasis in choral conducting and piano. While there, she was invited to be music director for the school’s production of “Cabaret” – conducting both orchestra and singers in multiple performances. Receiving a full scholarship to attend graduate school at the Cincinnati College-Conservatory of Music, Kathy went on to receive a Masters degree in piano performance and was subsequently offered a full scholarship plus graduate assistantship to pursue a doctoral degree at the Conservatory, but accepted an invitation to join the music faculty at Lee University in Cleveland, Tennessee instead.

Her professional career has taken her from teaching at the university level through over 30 years as a minister of music in Church of God, Assembly of God and Methodist congregations. She is well-known for producing large-scale dramatic-musical performances and has built successful choral programs in several churches. Kathy served as founding co-pastor and minister of music at Potomac Valley Assembly in Germantown, MD from 1987 to 2002 and then in 2003 became organist/accompanist and subsequently Director of Music and Arts at Trinity United Methodist in Frederick, MD. She also added “music teacher” to her many roles in 2000 when she began teaching vocal and general music at Patapsco Middle School in Howard County, MD. There she conducted 3 award-winning choruses involving over 230 students.

(continued) Kathy was the original accompanist with The National Christian Choir, beginning at the very first rehearsal in January 1984, and worked closely with founding director, Harry Causey, over the years to help develop the NCC into the fine choir it is today. In 1997, Kathy left the NCC for a brief period to devote more time to her church ministry, and then returned to the Choir in 2002. She has not only served the Choir as pianist, but also as assistant producer on nearly all of the NCC’s recordings. Kathy has written many choral arrangements and original compositions that are included on NCC recordings and several have become Choir favorites. Her inspiring choral anthem “I Choose To Believe” was voted #6 among all NCC anthems over the choir’s 25 year history and was performed at Strathmore Hall by the NCC with the Peabody Conservatory Orchestra during the choir’s 25th Anniversary concert. “I Choose To Believe” may be heard on the NCC’s 25th Anniversary CD as well as on “O Holy Night”, one of the choir’s earlier Christmas recordings.

2006 was a year of big changes for Kathy. In January she left her teaching position to prepare for a February wedding to long-time friend, Dennis Bowman and in April, they moved to their new home in Gettysburg, PA. In 2009, Kathy began work on a long-awaited project – her debut solo piano album. Entitled “Songs From the Heart”, this collection combines dazzling keyboard skills with a moving and sensitive artistry to reflect the anointed playing style for which Kathy has become so well-known. Unique original arrangements of 13 favorite hymns and worship choruses are included on this CD.

In addition to her musical activities, Kathy has been a sought-after speaker within the Christian community, addressing worship conferences, ladies’ retreats and church seminars. Her frank, often humorous, teaching style has helped many people mature in their faith as she deals with topics related to worship, leadership, women’s issues and general Christian growth. Kathy’s wonderful insights into God’s word and practical Christian living may be heard as she now hosts the NCC’s weekly radio broadcast “Psalm 95”, aired on over 400 stations around the country.

In 2011, Kathy left her positions at Trinity Methodist to become the Director of the National Christian Choir, following the successful 27 year tenure of founding director, Harry Causey. She feels that her entire life of music and ministry has prepared her for this role and she treasures the opportunity to serve God in this capacity. In her own words: “I wake up every morning thanking God for the joy and the challenge of leading The NCC – the day can’t begin early enough or last long enough because I just love what I’m doing now!”

Under Kathy’s leadership, the ministry of the NCC has expanded to include a new ensemble – “2nd Edition”, comprised of 24 auditioned voices from the larger Choir – which is available to minister at smaller churches that cannot accommodate the full NCC. She also initiated the formation of the First Annual NCC Children’s Christmas Choir that participated in the Choir’s 2011 Christmas concerts.

Kathy is Mom to 3 wonderful children: Gavin Miller (and wife, Caitlin), Carrington McDowell (and husband, Ryan), and Aynsley Keller (and husband, Kevin). She is also “Gram” to two grandsons, Deklan and Miles Keller, and one granddaughter, Quinn Miller.

Favorite Scripture: (a hard choice!): “Have I not commanded you? Be strong and courageous. Do not be terrified; do not be discouraged, for the LORD your God will be with you wherever you go.” Joshua 1:9

Favorite Song (another hard choice!): “Something Happens” by The National Christian Choir.